The Luce Line State Trail is a popular spot for bicycling, jogging, or even cross country skiing. While it’s nice to sip some water after an intense time on the trail, you can now grab a beer at the newly opened Luce Line Brewing Co.

Luce Line Brewing co-owner and co-founder Kate Coward is intimate with the area. She loves the outdoors and grew up near the Luce Line and is a competitive endurance athlete, concentrating in fat and gravel bike racing. She worked and commuted in or through Plymouth for years.

After working in corporate finance for 15 years, she left her divisional CFO role at a medical technology company and was ready to pursue something new.

“I had done what I wanted to do in that space and was looking for a different challenge and incorporating things I wanted to do,” Coward says, adding that she wasn’t necessarily leaving to pursue a brewery. It wasn’t until she spent some time last fall with brewery owners to learn what brewing and selling beer was all about that she felt like opening a brewery was her goal. “I came home and told my husband I was going to make a go at it.”

The motivation to do something where Coward would ultimately be the responsible person in charge was appealing.

“I was part of these organizations and added value, but the buck didn’t stop with me,” she says. “I wanted to bring the community together. I like to run, bike, go to breweries and wineries. I like to drink. I wanted a place we could bring people together that was inclusive. Whether you’re drinking alcohol, non-alcoholic beverages, walking… we could build something to bring them together and give them a chance to come together in a meaningful way.”

It helped that the Plymouth area was quite dry in relation to the number of breweries and pubs in and around the Twin Cities.

“There wasn’t much close by. If you looked at a map, there’s a big bubble where there are no higher-end restaurants or pubs. There is no place to go and do date night unless—no offense to Arby’s or Applebee’s—but beer enthusiasts aren’t going there for their beer,” Coward says.

Instead of going it alone, she formed a partnership with Tim Naumann, who spent his career in various industries and was also trying to open a brewery—even looking at the same buildings as Coward.

“We decided we both couldn’t pursue the same idea on the same street,” Coward says. 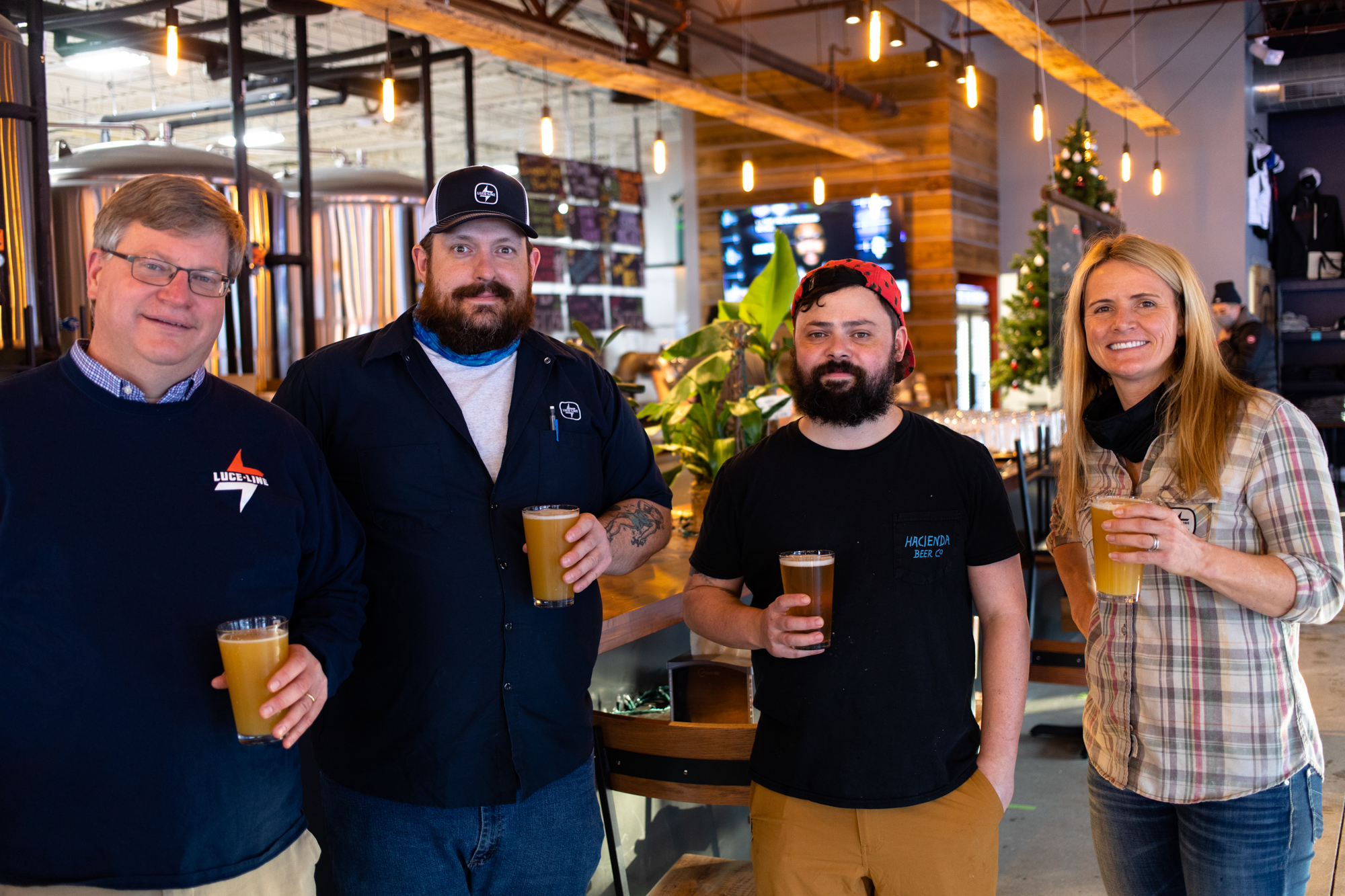 The 4,500-square-foot brewery and taproom is located just off the trail and has a rustic vibe that Coward describes as one that isn’t trying too hard. Different types of wood like poplar from Belgium and hemlock from Austria fills the space. You can still see nails in the reclaimed wood. Cuts from large beams from barns in Ontario were used for the light fixture above the bar.

“We tried to add character without being kitschy,” Coward says.

The beer itself is familiar: lager, pale ale, two hazy and traditional IPAs, hazy pale ale, pastry and traditional stouts, and hefeweizen are all on tap, with a Pilsner on deck soon. The beer, brewed by former Hacienda brewer Danny McMahon, was meant to be a little more approachable during opening. He intends to keep inventing new, relevant and interesting recipes with a mix of traditional with trendy.

“Hazy IPAs from Danny McMahon as that’s his thing,” Coward says. “He’s super creative. [We] opened with accessible beers, but now let’s have fun and see what people want. We want people to tell us what they want.”

Hard seltzers and non-alcoholic drinks like kombucha and hopped tea will remain as options too so non-drinkers can enjoy a beverage at Luce Line. They plan to develop their seltzer line into a unique offering people have not experienced before.

Soon the building that houses Luce Line will also host the second location of Trailhead Cycling. A garage door will open into the shop from the brewery, and Coward expects to host events and cobrand with the bike shop. Bicycle and beer enthusiasts will have a place to commiserate.

“The whole point is people come here and get together with friends,” Coward says. “It’s their place. It’s ‘Cheers.’” 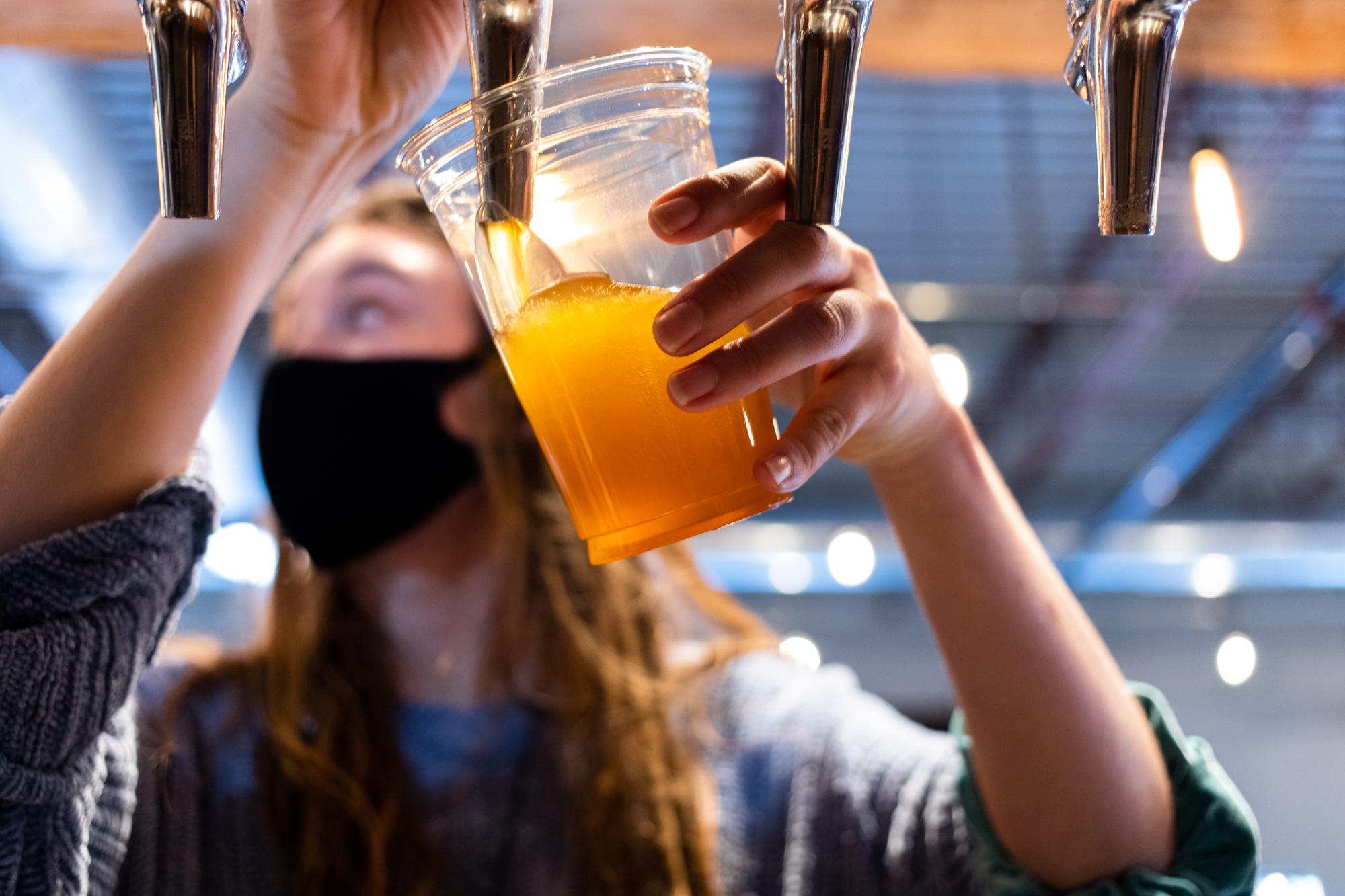